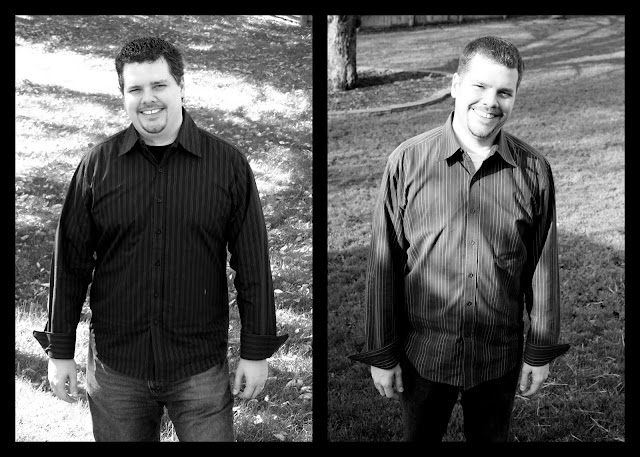 This is my husband.  He is SO not going to like that I've posted this, but he'll get happy in the same pants he got mad in.  Haha!  :)  We were talking the other day, about the fact that he didn't have any "before and after" pictures of his weight loss.  Of course, this prompted me to dig through my photo files.  This would not be an exact picture of the timing of it all... but it does give an accurate representation of his "before and after."  :)  It also says a whole lot more about my wonderful husband than meets the eye.

First of all, you can see how much he "loves" to have his picture taken!  The first photo was taken around his birthday a few years ago.  His mom asked me to take it, and that was the only way I could guilt him into letting me do it.  The second one, I practically begged and pleaded, on hands and knees.  I had the "comparison shot" in mind, and noticed he'd worn the same shirt as in the first picture.  He finally gave in (because he loves me!) and let me take a quick photo in the back yard before he left that day.  Can you see the exuberance in his expression?  Yep, he loves me!

What these photos represent more than an obvious weight loss, is a trait in my husband that I absolute adore... his determination.  That guy on the left, is the guy I'd been married to for several years!  Incidentally, I found him to be extremely handsome!  :)  But one day, he came home, and told me he planned to lose thirty pounds.  I smiled, and nodded, and was probably way less supportive than I should have been... But before I knew it, he was shedding pounds faster than I'd ever imagined!  I was buying new clothes left and right, because the guy couldn't keep his pants up!  :)  Watching his diet became second nature, but then the real obsession began... he started running.  He started increasing his miles, and became fascinated with his trips to Fleet Feet.  :)  Then, we entered the racing scene.  I don't know how many "little" ones he has done, but I know he has done THREE half marathons since that time.  I find him to be absolutely amazing.

I'm pretty sure his "thirty pounds" ended up being sixty.  And he keeps it off, too.  If he notices a slight increase one week, he'll lose it the next.  I often tease with him, that if a woman could ever hope to lose ten pounds within a week, the way a man could, we would be way more likely to continue the process!  But the fact is, it's not "easy" for anyone.  I have to give credit where credit is due, and my husband is totally awesome.
Posted by ilLaurastrations at 8:55 AM