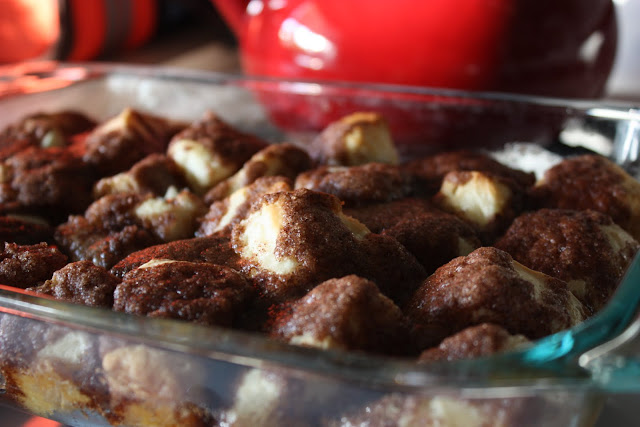 For years, on Sunday mornings, I've served my kids cinnamon rolls for breakfast.  Since our recent food changes, I have not bought this canned product to serve to my kiddos, and tried to replace it with something new.  One week, I tried English muffins with several choices of toppings.  They didn't like any of them.  Another morning, I tried waffles, which they enjoyed, but nothing has come close to the cinnamon goodness they were accustomed to!  I think I finally found a winner.  The point is, it has to be something quick and easy, but different than what they'd eat through the week.  This is a modified version of "monkey bread," since I don't have a bundt pan.  These are canned biscuits from Trader Joe's, but they have whole ingredients instead of preservatives and hydrogenated oils.  Never mind the fact that they're 10 grams of fat per biscuit!  At least it's natural, and their bodies know how to process it.  After all, it's a "treat" once a week, so I think we can make allowance for it!
Posted by ilLaurastrations at 6:48 PM