Time For A New Suit.

My two older boys have had their turns, playing ring bearer.  :)  I missed it with my oldest.  :(  I was eight months preggers with KS3, so I avoided the plane ride and stayed home with KS2.  My husband and oldest son flew to Alabama to see the hubby's brother and wife get married.  KS1 was about four years old at the time, and he and his cousin were the ring-bearing duo.  :)  My hubby was a groomsman.  I have a few snapshots.  I sent along my camera with instructions for my mother-inlaw to take as many pics as possible.  What was the first thing I noticed???  They switched the boys' tuxes.  KS1 is quite a bit larger than his cousin.  The sleeves were short on one... hanging off the arms of the other.  Oh well.  You just can't control everything, right?  :D  They still looked handsome.

A few years ago, my own brother got married.  It was KS2's turn.  He was also about four years old.  My sister-in-law happily allowed us to use a suit rather than renting a tux.  Oh, he looked so darling.  This particular suit was actually my youngest brother's, believe it or not!  He wore it in my best friend's wedding years ago, and it fit KS2 perfectly.  It still looked brand new and in style!  I would post a picture to ensure you he didn't LOOK like he came straight from 1995, but I still have some missing photo files from when I switched computers... I don't think I've told that story.  Ugh.  No reason to get into it now.

So, now, it's KS3's turn.  My best friend's little sister (who is also my friend :) has asked that KS3 be her ringbearer in her wedding next month.  Well, the suit KS2 wore is too small.  And the only one I had that "kind of" fit... well, take a look: 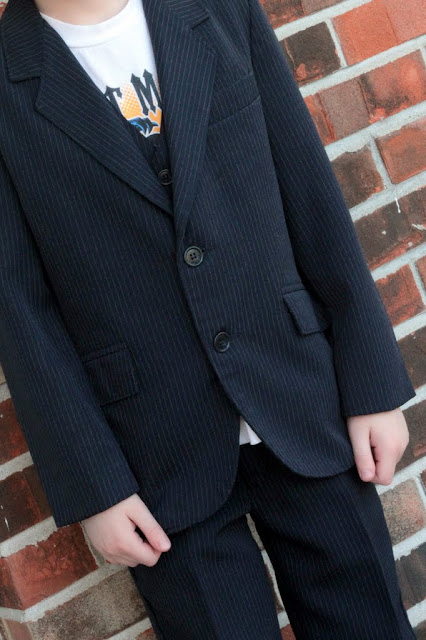 It was also my little brothers' (I've mentioned my mother keeps EVERYTHING, right?)... It belonged to one of them, anyway.  But it was probably a hand-me-down to one of them, even.  AND it's navy blue, which is NOT going to work... I don't know that I'm very good at telling when a little boy's suit looks dated, but I think I can recognize the extreme.