Minute to Win It.

I've lost count of our snow days this winter.  This week alone, we're on our third.  Spring break is going to be a short one.  :(  My kids have filled their days with various activities.  They're not even interested in going outside.  It's bitterly cold.  They're not even interested in getting out of their jammies.  In fact, I've had to FORCE them to brush their teeth!  Gross.  They don't seem to mind these days at all!  In the meantime, the cabin fever is taking its toll on Mommy.  I am not one to complain about cold weather.  I rather enjoy it, actually.  But single digit temperatures, ice, and snow... well, that's a different story.  One just can't have her cake, and eat it, too, I suppose.  Speaking of eating... another "glitch" in this whole snow-day routine.  I've probably gained five pounds!  Yikes.

So, I have a picture for you today.  KS2 is practicing his cup-stacking game this morning.  :)  We watched Minute to Win It on TV last night.  He's a big fan!  He has been known to win a couple of rounds in their children's church version, in fact.  :)  When he's finished building the pyramid, he slides them all down on top of one another, and stacks them. 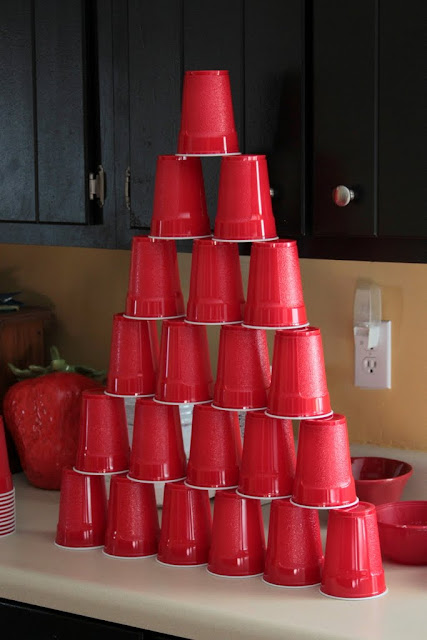 Posted by ilLaurastrations at 9:25 AM