On Valentine's Day, I attended all three of my boys' class parties.  It was interesting to see the variation among the age groups.  I'll give you examples:

KS3's class had crafts galore.  We decorated these little candles with ribbon and tissue paper.  We made a paper valentine complete with tissue paper decoration and lots of glue!  And we had fun with making our own Valentine bookmarks... more ribbon... lots of stickers.  :) 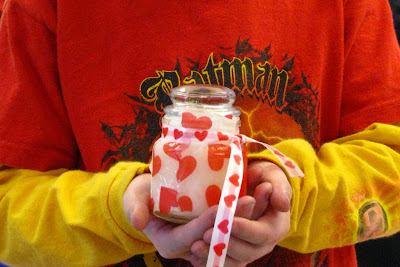 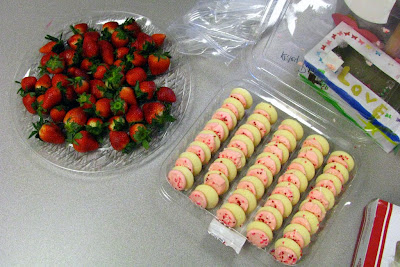 Other than the crafts, there were snacks and the Valentine exchange, which they were all just thrilled about!  Their previously decorated Valentine bags were lined up in a row, and each child had a turn to put his/her Valentine in each of the friends' bags. 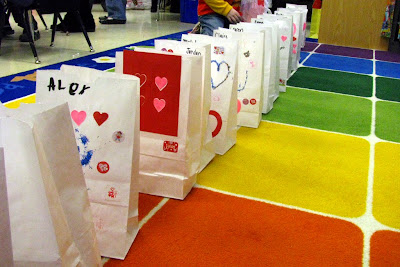 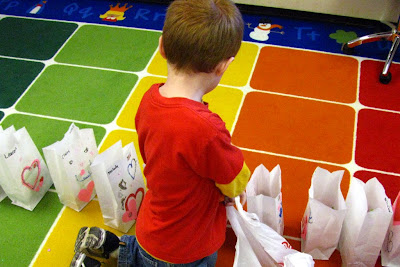 We had a great time, and KS3 probably told me a hundred times how much fun he was having, and how glad he was that I was there.  :)

Later that afternoon, I moved on to KS2's party.  This one was all about activities and games.  We played "pin the heart-nose on the Valentine" and "Valentine Bingo." 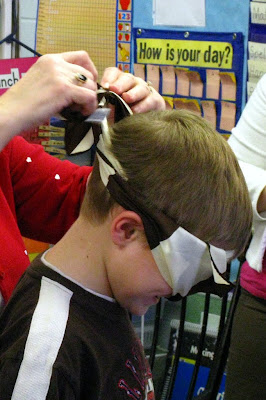 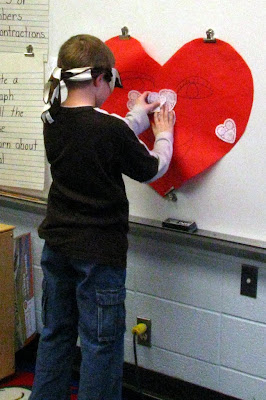 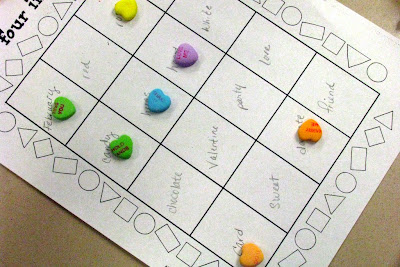 They did decorate their Valentine bag as a craft, but passing out was much different.  Several students were given a turn, to hand their cards out to their friends while their friends waited patiently at their desks.  Like KS3, KS2 gave me lots of hugs and affection.  :)  It's just their way.  They're snuggle bugs.

KS2 and KS1's parties overlapped a bit, but I was able to make it to the very end of KS1's... which was fine with him either way.  KS1 is my independant child.  He is loving in his own way, but doesn't like a lot of attention.  He has said himself, "Mom, I'm just a 'back row' kind of guy."  :)  For the last couple of years, he hasn't even wanted me to bring birthday treats to his class.  He says it just causes too much attention.

I actually had to coerce him into bringing anything to share with his friends.  He assured me only a few of the kids would actually hand out Valentines.  I told him the least we could do is buy a box of those Valentine bags of candy, and he could just put them on the treat table if he wanted.  That way, he didn't have to pass them out, but he could still contribute.  He seemed to like that idea, so he went to school that morning with his box of Skittle Valentines in hand.  :)

This is what I found on his desk when I arrived to his class that afternoon. 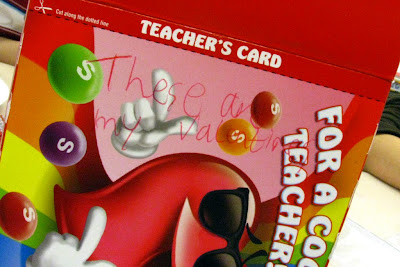 I really only planned to pop my head in to say "hi," because I knew they'd be finishing up their snacks.  No other moms were to be seen, so I cracked open the door and waved.  The kids all shouted a "hello" my way (they know me from helping out every week), and my eldest son smiled his sheepish, little smile.  His teacher said she had a craft that I could help with, so I figured I could stick around and help her out.

I didn't hover over my son, so as not to embarrass him.  I didn't go crazy with too many pictures.  I do my best to tread lightly as he's growing older.  He's the kind of guy who needs a little "space," so I try to respect that.  He says all of his friends think I'm great... AND hillarious, so I must not be doing it ALL wrong.  :)  I went along my way, helping some of his friends with the little yarn-creature craft they were making (trust me, the help was needed!). 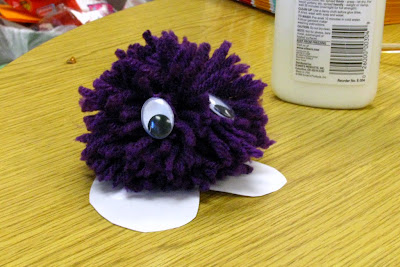 The time was about over, so I was headed out the door... I started to wave to KS1 on my way out, when he called out for me to wait!  And then it happened... Right in front of his classroom full of friends, he got up from his desk, walked to the door, and hugged me goodbye... no looking around to see who was watching... not any differently than he would have in our own living room.

Yep, he's still my baby.  And I'm still his mommy.  I couldn't have asked for a sweeter Valentine's Day.  :)
Posted by ilLaurastrations at 6:39 PM