So, were you all waiting with baited breath?  I kind of left you hangin', didn't I?  Well, probably not.  Any of you who read this, likely already knew.  :)

It is official, I am going to be the aunt to another nephew.  SWEET!  I love baby boys.  :)

Here he is, growing all healthy and strong! 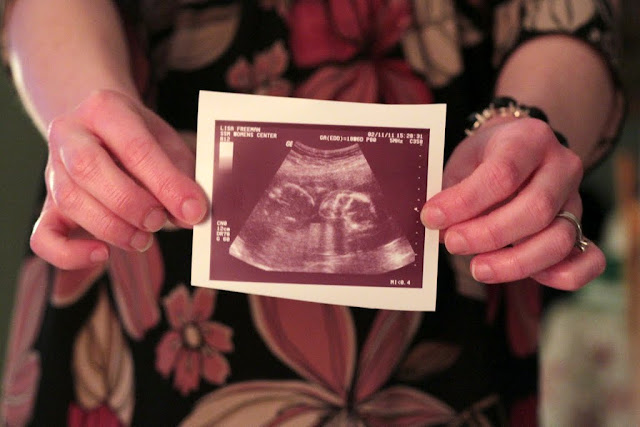 (Left) My handsome brother and his beautiful wife and baby.  :)  This was before they came inside to announce the news to everyone.
(Right) The following day, we had a girls' day with our family and Lisa's to enjoy lunch together and do a little shopping spree for Baby Benjamin.  See that cute tummy?  LOVE IT! 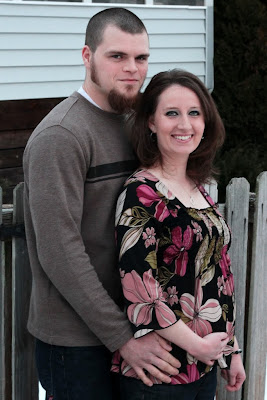 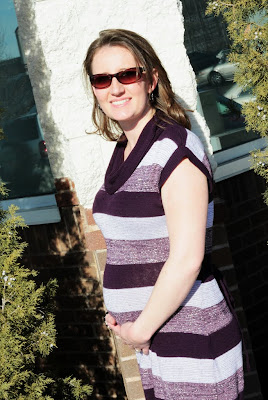 We all stayed in the living room at my parents' house, and they walked in with the "surprise" behind Lisa's back... She revealed the little boy outfit they had gone out to buy after their doctor appointment.  :)  It's a BENJAMIN!  :) 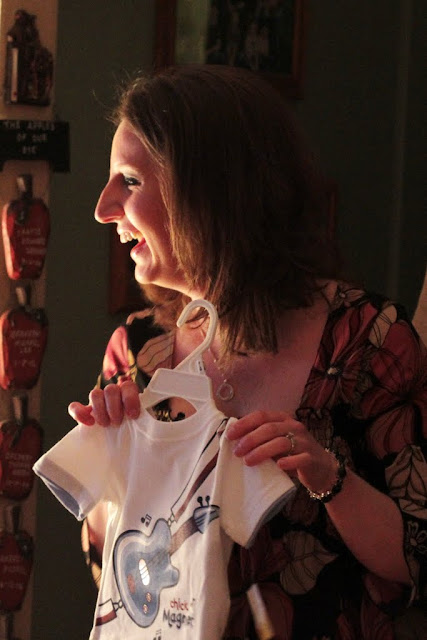 And this is my favorite.  I had to play around with it, because the light in the background messed with my camera settings.  But I just HAD to save the image somehow.  Just look at that mommy's glow.  She is so excited to have this little one growing inside of her, she can hardly contain herself!  I'm surprised her cheeks don't hurt from smiling so much.  She just exudes mommy pride.  And my brother's expression in the background is just as precious... He has that content, happy gaze as he watches his wife... the woman carrying his child.  Pure joy. 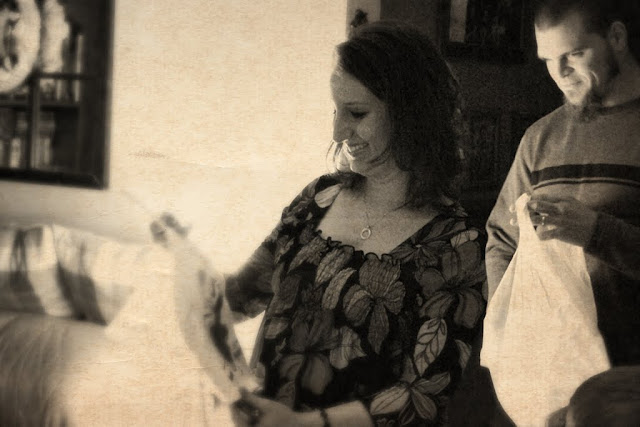 Benjamin Thomas will arrive in July of this summer.

I don't think I've told the story of his name yet.  Thomas is also my brother's name (incidentally, one of my own children carries that middle name as well!  I love family names.)  But his first name is Benjamin after the brother that none of us were blessed to meet, other than my parents.  #3 down the line of the children in our family, was a baby boy.  He was stillborn, after my mother had carried him for six months.  They named him Benjamin Michael.  I would have been four years old at the time, yet I remember it vividly.  I know God has a purpose behind those kinds of things, but we've all had our time of wondering what it would have been like if our brother had lived.  How would our family have been different?  I don't think there's a thing wrong with wondering.  It doesn't mean that we don't trust God's plan, even though we don't know His purpose behind it.  But I am confident that one day I'll meet my little brother in heaven, and I won't care about the why.  My parents have always included his memory in our family as we've grown up.  My mom finds comfort that her baby boy is in heaven with his earthly grandmother and heavenly Father.

Now, in this very special way, because God laid it on the heart of my brother and his wife YEARS ago, before they ever formed the baby she is now carrying, the name Benjamin will have another new and special meaning to our family.  The mere thought gives me goosebumps, and brings tears of joy to my eyes.

The gift of life is one that will continually amaze me.... the way God forms and designs a little, human body, down to each toe and finger.  He decided long ago if Benjamin will have eyes like his mommy's or a nose like his daddy's.  :) ...whether he'll be short or tall.  ...whether he'll like cars or music.  Either way, he will be loved by a whole lot of people.  Of that, I am certain.
Posted by ilLaurastrations at 2:41 PM