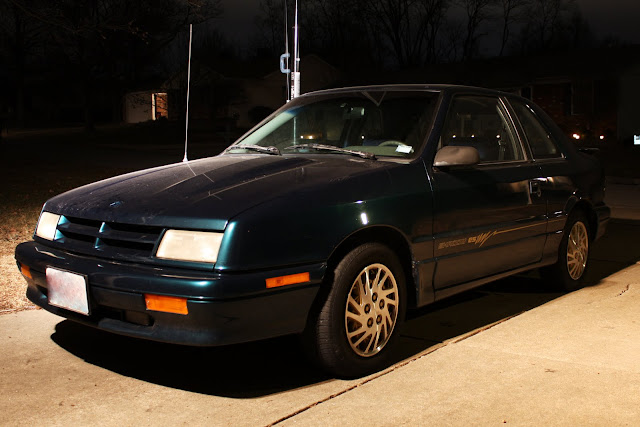 This car is a beauty, isn't it?  Haha!  Well, it was stylish and sporty in its day.  :)  This is a 1994 Dodge Shadow ES.  It is the first (and only) brand new car my father ever owned.  He was quite proud of this car at one time.  (He has since moved on to bigger and better things!)  He gave this one to my sister for a time, and since then, she moved on as well, so it's back with my parents.  Dad uses it to go to work to save miles on his nice car.  It does the job nicely.  Anyway, my parents were kind enough to loan it to us for a few days, because my husband needs a "go to work" car while my brother valiantly attempts to revive our truck.  The other day, our trusty old truck broke down on the highway, and come to find out, it's going to need its engine rebuilt.  UGH.  I have to remind myself that without cars, walking everywhere would certainly be a nuissance.  But cars can be SUCH a pain!!!  Grrrr.
Back to the Shadow... Dad bought this in my later highschool years, and looking back, I'm in awe that he ever let me borrow it from time to time.  You see, cars are one of my dad's "things."  Everyone has things they're particular about, and I could name few that my dad is more particular about than his cars.  The fact that this was his first/only NEW vehicle, and that he allowed his flighty, teenage daughter to drive it around the neighborhood, is quite sweet to me now.  I'm certain I didn't fully appreciate it back then.  It had to have taken everything in him to hand over those keys!  But he did.  :)  And I thought I was so cool!  (Come on!  It was 1994.  It beat driving around in the old station wagon!  Sheesh!)  It is quite comical to me now, that my husband will be driving this to work in the morning.  Hee, hee!  :)
Posted by ilLaurastrations at 10:23 PM