Just like any mommy, I absolutely can't stand it when of my kiddos gets sick.  KS2 woke through the night with a stomach bug last night.  Oh dear.  I'll spare you the gorey details.  Throughout the next day, he just slept and watched TV all day long.  In the meantime, Mommy did about 6 loads of laundry, while disinfecting every surface of the house... doorknobs, lightswitches, faucets, sinks, toilets... You name it, it has been doused in Lysol.

A friend suggested airing out the house, so I gave it a try.  I turned off the heat, opened up the windows, and turned on the attic fan until the house hit a chilly 55 degrees.  (KS2 stayed bundled up in three blankets and his hat and gloves!) 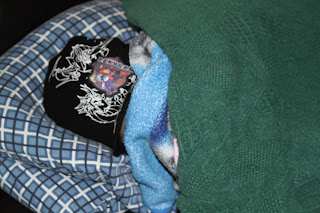 No worries.  We warmed everything back up.  :)

All was not lost for the day.  He got all caught up on watching Myth Busters (as though he hasn't seen every episode at least a dozen times) and he did a lot of this: 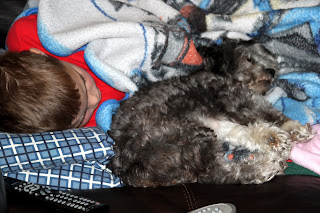 Nothing like a boy and his dog.  She stayed cozied up next to him all day long, sweet girl.

Still watching and waiting to see if the bug will hit someone else in the family.  So far, so good.
Posted by ilLaurastrations at 8:39 PM