We had a death in the family today.  KS2 and KS3's fish decided it was time "to go."  He is resting in the sewer system now.  There were tears, but all was well after school when we went to Petco and replaced our dearly beloved "Soccer," the beta.

We have been through several of these hearty, little guys.  I remember writing about this before, in fact...

Long story short (no, I'm not capable of that), I have FINALLY figured out how to keep these things alive for a little while.  Thankfully, we had a MUCH smoother beginning of pet ownership when it came to our doggies.  At least we never lost one, that is.

My sister saved me a lot of hassle by finally convincing me that a tank with a filter is the way to go.  I'd been keeping them in plain, old fashioned fish bowls up until then... you know, the kind that Dorothy lives in, in Elmo's World.  Well, if it's good enough of her...

Nope, go with a filter.  In this case, you barely have to maintain at all... at least that's true of a beta.  I've never tried to keep another kind of fish, and I doubt that I ever will.

KS2 and KS3 share a room, so they share a fish.  Here's our newest family member.  She's the first GIRL beta we've ever had.  Introducing Tiny Silver.  (That's what I'm calling her, because KS3 says she should be named Tiny; KS2 wants to name her Silver... the rest is pretty self explanatory.) 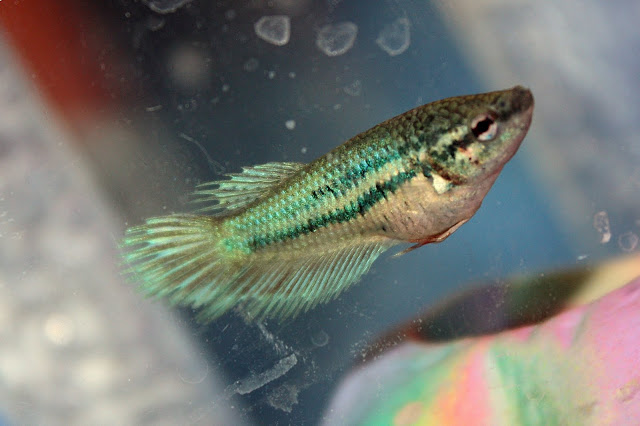 You know what I've discovered?  Taking a decent picture of a fish is not so easy.  :(  This is the best I got, and you'll have to forgive the water spots on the tank.  She lives in a little boys' room.  Trust me, that's NOT the worst thing in there.

And my sweet eldest child had given up on the whole fish concept when his last one had been found, MUCH too long after his life had passed... and, well, we ended up flushing TWO pieces of fish down the toilet.  I know, way too much information.  I guess KS1 got over it, because yesterday when his brothers brought home their new pet, he didn't want left out.

So, here we have "Cobra," named after a Cobra Mustang, of course.  Once again, difficult to get a picture.  He was camera-shy, too.  He did NOT want to give me ANY good poses.  Obstinant! 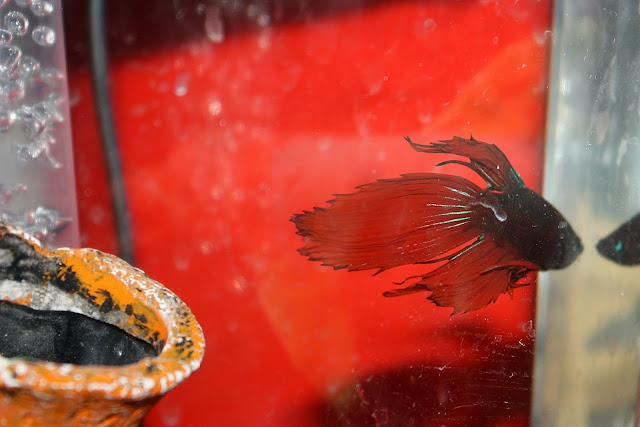 And there you have it.  Life is never dull around here!
Posted by ilLaurastrations at 4:15 PM