I just love pictures.  I've ALWAYS loved pictures.  Have I mentioned that?  Something about going through old photo albums, just warms my heart!  I can get completely lost in the process.  :)

Today is my baby brother's birthday.  So, a walk down memory lane is in order!  If nothing else, my mom will enjoy it... and she's been missing my blog posts... so aside from celebrating my littel brother, this is for you, too, Mom!  :)

Caleb was a teenage girl's dream come true... At 14 years old, my parents blessed me with my very own, real-live baby doll.  :)  And that's exactly how I saw it.  After all, it was ALL about me at the time, you know.  I was convinced they had him just for me.  :)  Oh my goodness, I was so in love with him.  In the midst of a girl's teenage drama, my baby brother was a constant source of joy.  I just adored everything about him... still do, in fact.  :)

I left home when Caleb was only 5 years old.  He doesn't really remember much of his life back then... He doesn't even remember my living at home.  That fact used to make me sad... but I've come to the conclusion that it doesn't really matter.  I remember it... very well, in fact.  And nothing can take away from the sweetness those memories hold for me.

It's no huge secret, that for most of us, being a teenager is a pretty difficult time in one's life.  It's a constant, emotional roller coaster ride.  Hormones are all over the place.  Things that seem to be SO important, really aren't... and the things that really DO matter, don't get nearly enough attention.  Well, that's how it was for me, anyway.  But there was something about that little boy that would bring me back to reality.  His sweetness.  His innocence.  His smiles.  His snuggles.  His smooches.  :)  None of my drama mattered to him, one way or the other.  I was his big sister... the only one in the house who sang him to sleep... The girl who carted him around for car rides, and treated him to just about anything her part-time job could afford.  He may not remember it... but I do.  Looking back, his mere presence was probably the first impressions upon me that I LONGED to become a mother one day.  There was just nothing more precious than holding that baby boy in my arms and watching him grow.

I wanted to share a few snapshots, of course!  Ichose a few that were taken during my junior year of highschool.  Caleb would have been around two years old, in most of these... which put me around age 16.  (Forgive my big, burgundy thumbnail in most of the pics; it's just easier than waiting on the scanner.  :) 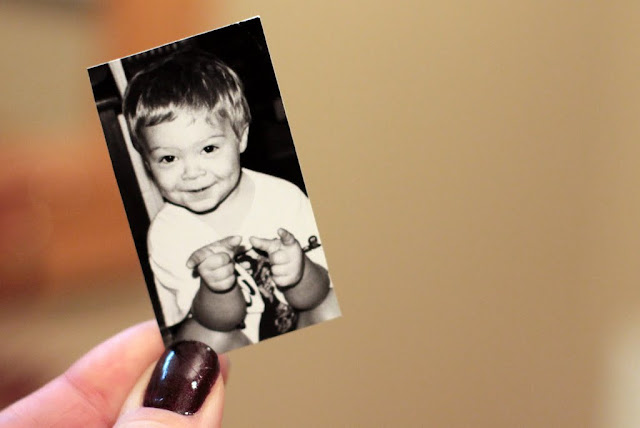 No better toy than an empty appliance box! 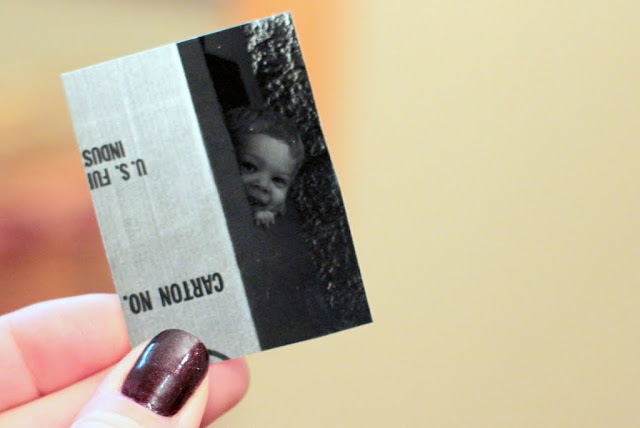 I'm pretty sure he was throwing a tantrum of sorts.  Haha!  :) 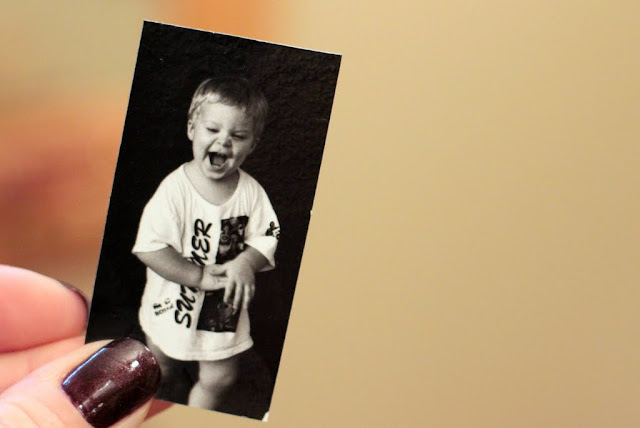 This was his expression when we would say, "Caleb, show us your pretty eyes!" 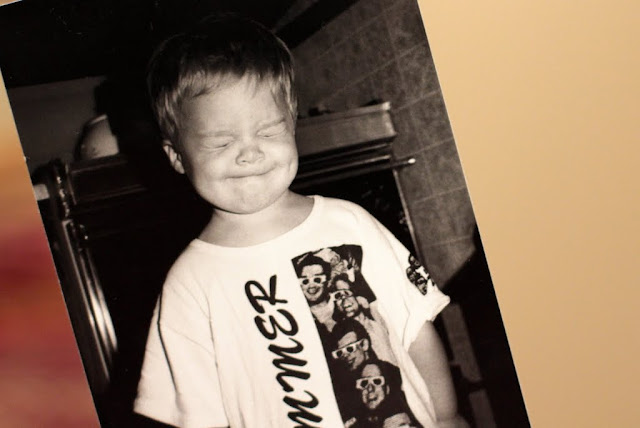 He just LOVED to play.  :)  Oh my goodness, the chubby-baby thighs!  LOVE IT! 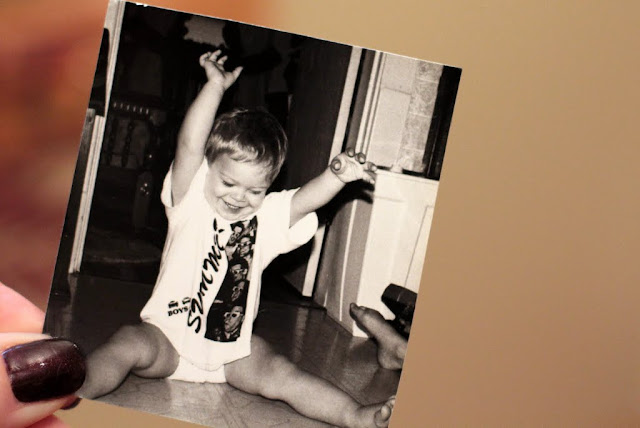 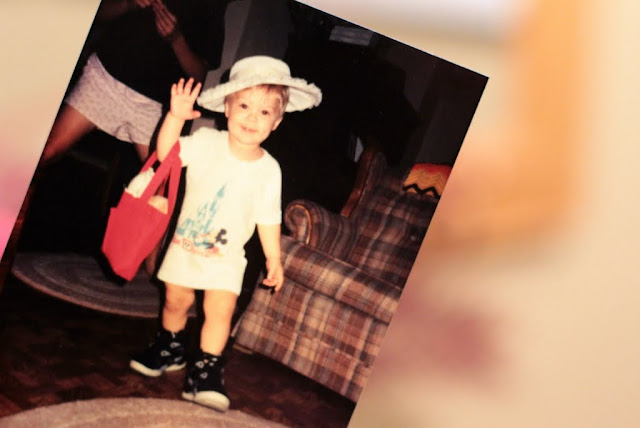 Um... who was supposed to be watching Caleb???? 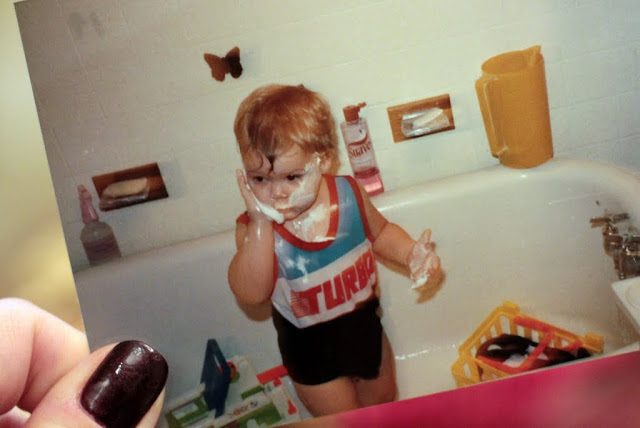 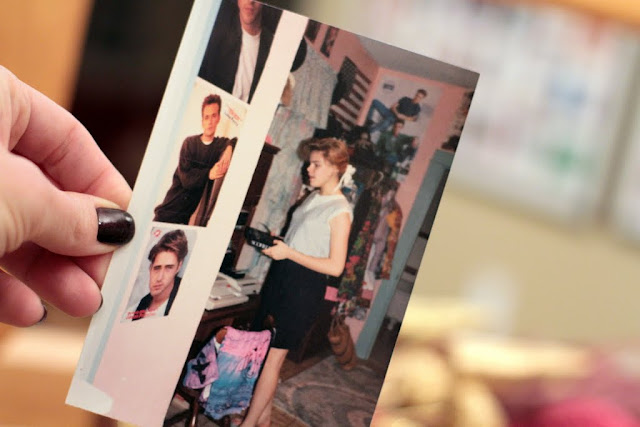 Both little brothers.  Oh my goodness, so handsome!  :) 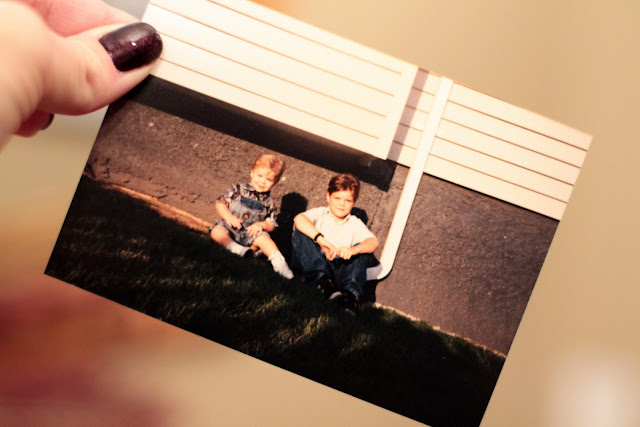 Oh, I could just kiss his little cheeks forEVER!  :) 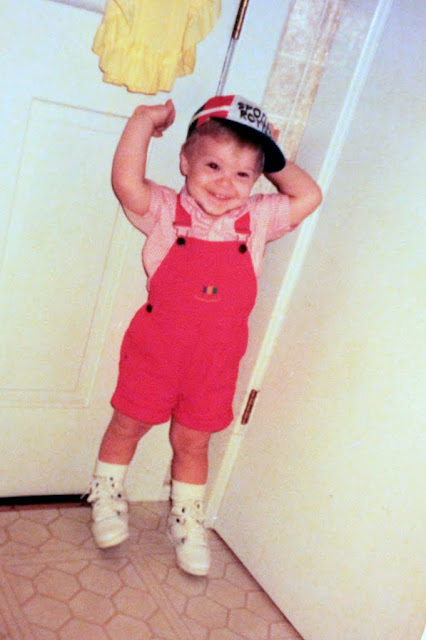 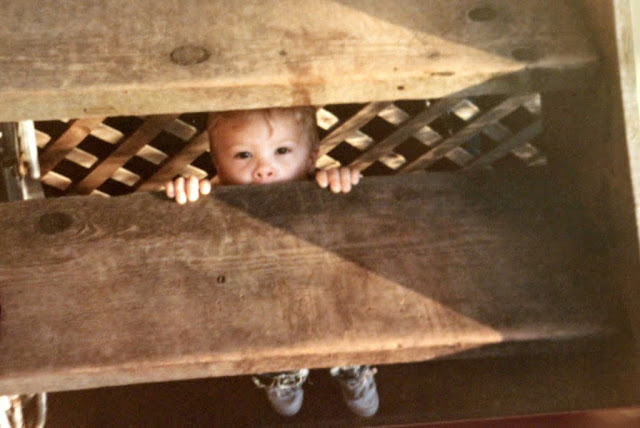 Caleb, did you save any Thanksgiving dinner for the rest of us??? 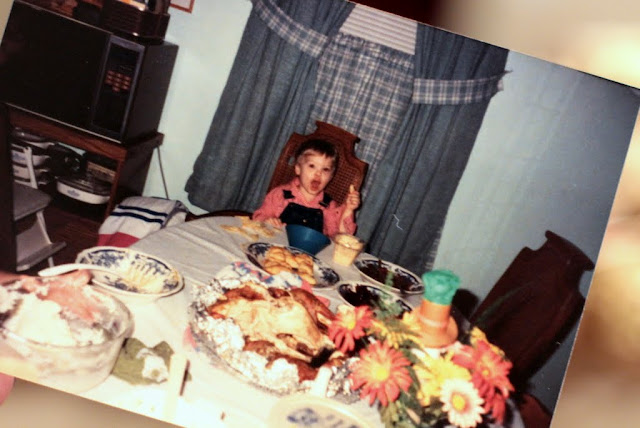 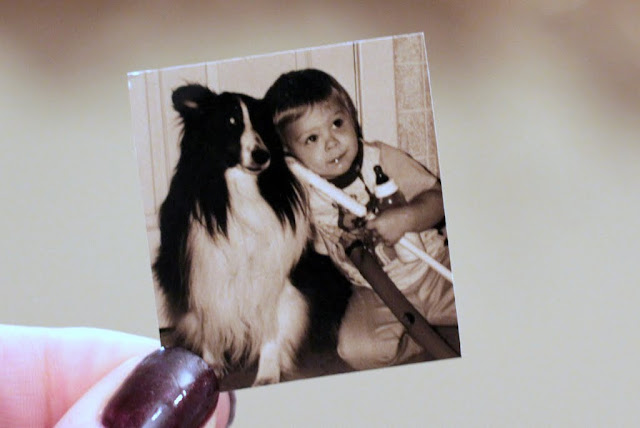 This would be where my second son gets his kissable dimpled cheeks.  OH MY GOODNESS! 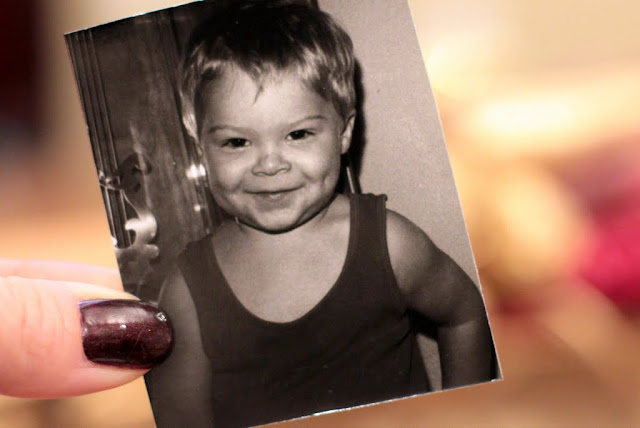 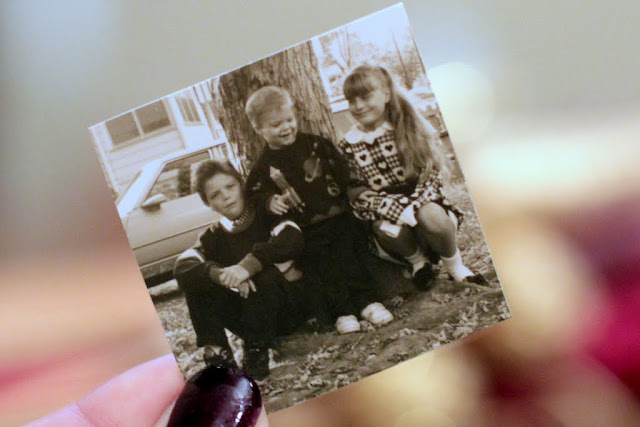 My dad, spending time with his boys.  :) 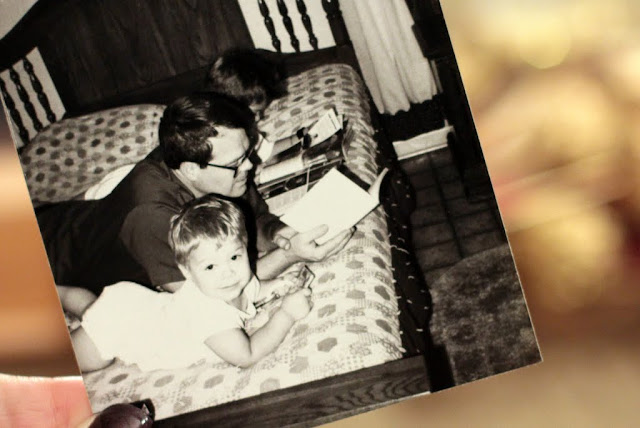 I couldn't leave out some of these treasures.  :)  And my sister wonders why we teased her about her hair?!!!  Oh my! 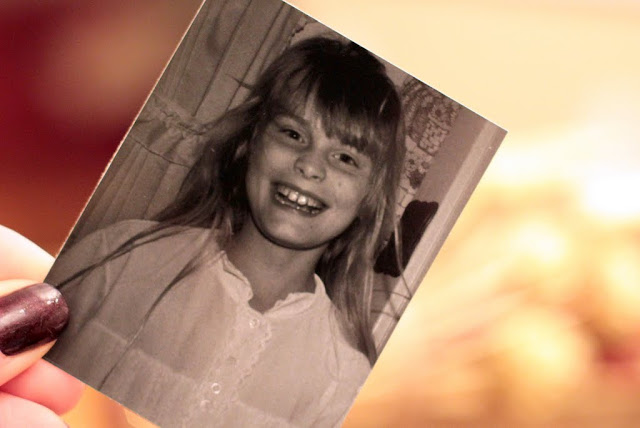 One of my all-time fave pics of my younger sister.  To this day, she HATES having her picture taken.  The only way I got it, was because I completely caught her by surprise... standing by her locker in between classes, and yelling from down the hallway, "HOLLY!!!"  Haha!  It's blurry and out of focus... but I don't care.  She's beautiful.  :) 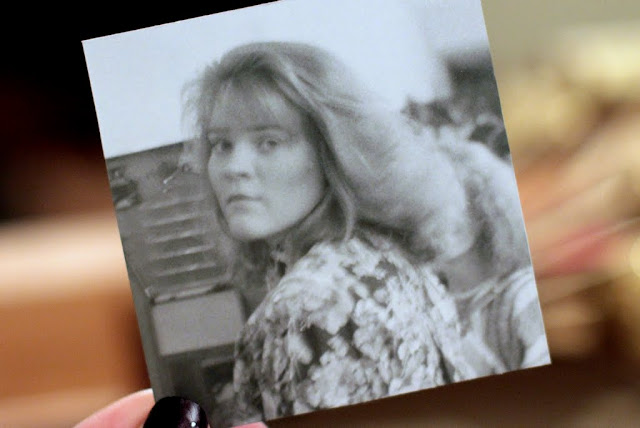 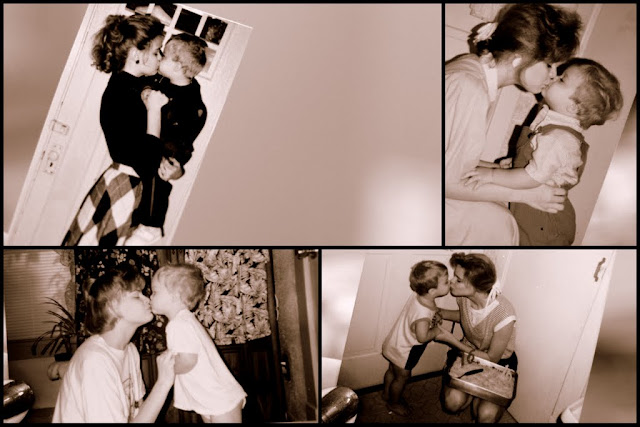 And here's my studly brother NOW.  :)  I cropped him out of a more recent pic of the five of us.  So handsome... still as sweet as ever... and STILL carrying around those adorable dimples.  :)  Love him to pieces.  Happy birthday, sweet Caleb Aaron!  Your old-lady-sister loves you!!! 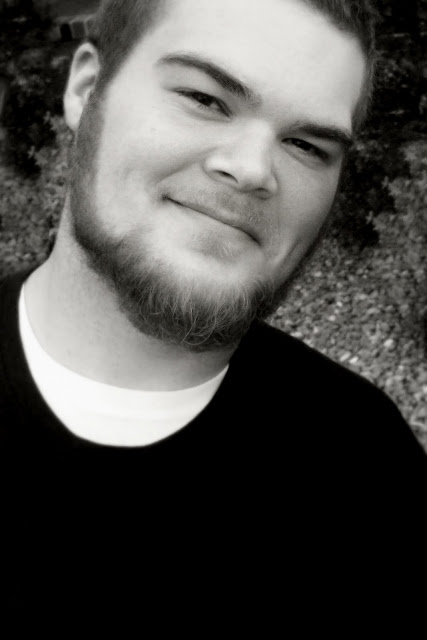 Posted by ilLaurastrations at 10:13 AM